Released in Alara Reborn, a set famous for being exclusively made up of gold cards in 2009, Mage Slayer was part of a cycle of uncommon Equipment cards. These 5 (which also included Behemoth Sledge, Demonspine Whip, Mask of Riddles, and Shield of the Righteous), along with Unscythe, Killer of Kings, were the first colored Equipment cards to be printed in Magic: The Gathering, and most saw play in casual and competitive environments at the time.

Despite looking fairly straightforward at first glance, Mage Slayer has created some of the trickiest rules questions of the batch. In order to answer some of these once and for all, I’m going to break down what the card does, what it doesn’t, and answer some common questions beyond that.

What Does Mage Slayer Do?

So far so good. You start by equipping Mage Slayer to a creature at sorcery speed like other Equipment. When the equipped creature attacks, Mage Slayer‘s effect triggers and goes on the stack. When it resolves, the creature equipped with Mage Slayer when it attacked deals damage equal to its current power to the player or planeswalker it is attacking.

How Does Mage Slayer’s Effect Work?

Since this ability occurs and resolves during the declare attackers step, the creature harnessing its effect isn’t doing combat damage, as combat hasn’t happened at this point. The creature, however, is the one doing damage, so abilities like Lifelink apply to the damage it is dealing.

Taking Mage Slayer out of the equation once this trigger is on the stack won’t stop the damage either – the creature is dealing the damage, and all it had to do was swing the sword to get it – the trigger will still be there to check the creature’s power on resolution and deal damage accordingly, whether Mage Slayer is still in play or not.

If an effect requires information from the game (such as the number of creatures on the battlefield), the answer is determined only once, when the effect is applied. If the effect requires information from a specific object, including the source of the ability itself, the effect uses the current information of that object if it’s in the public zone it was expected to be in; if it’s no longer in that zone, or if the effect has moved it from a public zone to a hidden zone, the effect uses the object’s last known information. See rule 113.7a. If an ability states that an object does something, it’s the object as it exists—or as it most recently existed—that does it, not the ability.

So simply put, whether you blink the creature out of existence for a moment, kill it, exile it, or return it to its owners hand, Mage Slayer‘s triggered effect will simply check the last known information for the creature and use that to assign damage.

This means that the only way to avoid taking a hit from Mage Slayer is to either remove it directly or deal with the equipped creature before it has a chance to attack.

When Should I Use Mage Slayer?

Mage Slayer‘s restrictive mana cost, relatively high Equip cost, and situationally powerful effect mean that it is a card best suited for casual games or Commander decks. It’s just too slow and unreliable for the world of competitive play in Modern, Legacy, and other eternal formats.

That doesn’t make Mage Slayer a bad card though – just situationally good. Decks that play a lot of efficient, high power creatures will often love this card, as you’ll be forcing damage through to your opponent before they have a chance to block, which can quickly put them in a position where they need to sacrifice useful creatures on their battlefield simply to buy themselves another turn in the game.

In Commander, this gets especially fun if the game lasts long enough to start swinging with monsters like Worldspine Wurm and Metalwork Colossus, or creatures that have abilities that can take advantage of the extra damage like Skithiryx, the Blight Dragon or Sephara, Sky’s Blade.

You can also use it with Gruul colored Voltron commanders like Kresh the Bloodbraided or Tahngarth, First Mate to incrementally build up power and deliver killing blows before your opponents have the chance to block. 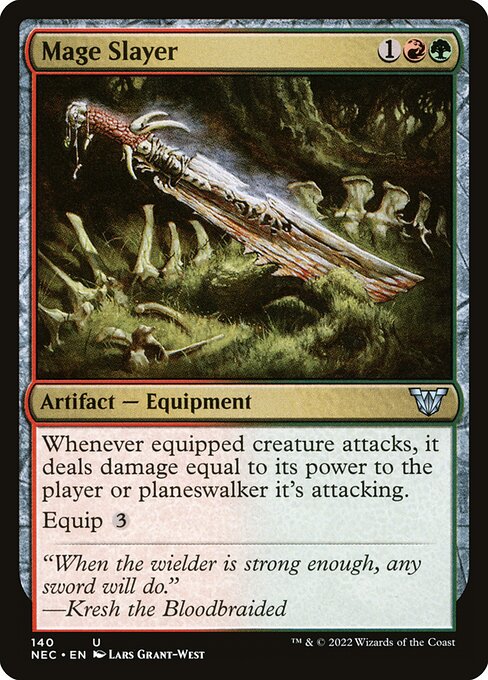 No. Mage Slayer‘s damage is dealt by a creature through a card effect, and both triggers and resolves during the declare attackers step of combat – before combat damage occurs.

No. Commander damage must come from combat damage for it to count toward the 21 points needed for an opponent to lose the game.

No. Mage Slayer only ever deals damage to the defending player or planeswalker being attacked, so no targeting is involved for the purposes of determining whether Shroud or Hexproof apply.

Is There a Way to Stop Mage Slayer’s Effect Once it is On the Stack?

You’ll need a specialized counterspell like Disallow or Stifle or a card that grants you protection like Seht’s Tiger at this point – destroying the creature or Mage Slayer itself will not stop the damage once it’s on the stack. Finding a way to reduce the equipped creature’s power is also viable, assuming it doesn’t have a bunch of +1/+1 counters.

Otherwise, you need to deal with it or the equipped creature before it attacks.